Aug 30, Most Famous Small Dogs: How Many Have You Heard About?

According to the Washington Post, 50% of American households now have a small dog. They make great companions, enjoy a cuddle on your lap and enrich lives.

Small dogs have also made their mark through history and on our screens. They have been heroes, explored space and even made it all the way to the Emerald City and back. No wonder those small dogs have a special place in our hearts! 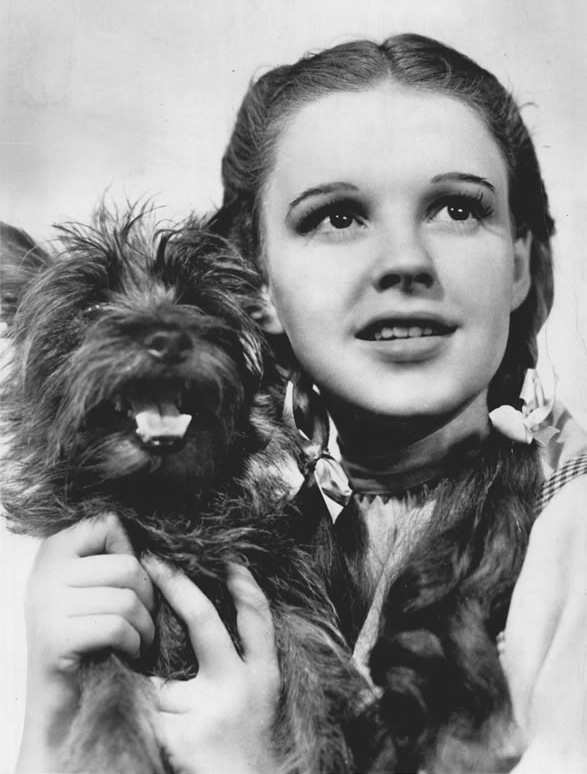 Toto, the little dog who was Dorothy’s faithful companion in the 1939 movie, The Wizard of Oz, was a Cairn Terrier, owned and trained by Carl Spitz.

Toto’s real name was actually Terry, and she was a girl! She did all of her own stunts, and almost died on the set of The Wizard of Oz after one of the Winkie guards accidently broke her paw by stepping on it. Terry spent the following two weeks recuperating with Judy Garland.

Terry (1933-1945) was a seasoned actor who appeared in 16 movies in total, including Air Force, Bright Eyes and Tortilla Flat. A special memorial to Terry the dog was erected in 2011 at the Hollywood Forever Cemetery in Los Angeles.

Read about the Cairn Terrier Breed

Laika – the first dog in space

Space travel is big business and it has been predicted that soon families could enjoy a space vacation together. Virgin Galactic and Blue Origin are already investing in space tourism. But way before Richard Branson, there was Laika the dog.

Laika, a former stray dog from Moscow, was part-terrier. Laika was the first dog sent into space on 3rd November 1957, aboard the Sputnik 2. There is a statue in Moscow dedicated to Laika, which was put up in 2008.

Boo – the cutest dog on earth

Boo, an exceptionally cute Pomeranian, became so famous through social media that he inspired four books. Boo had more than 16 million Facebook followers.

The book Boo: The Life of the World’s Cutest Dog, written by his owner, went on to be published in ten different languages. Boo passed away in his sleep, age 12, in 2019, and is very much missed by his owners and followers.

Snoopy – the best Beagle ever

Snoopy, who first appeared in comics back in 1950 is a worldwide legend. Created by Charles M. Schulz, Snoopy is still just as famous today as he was more than 70 years ago. Snoopy is lazy, selfish, gluttonous, and sometimes downright rude.

But he is also loyal and loving to his family and friends. These “human traits” are what make Snoopy a character that will continue to appeal to his audience for many years to come.

Jofi, the Chow Chow, belonged to Sigmund Freud, and he used her skills to ascertain the mood and mindset of his patients. Freud had worked out how much dogs are affected by human emotion – they certainly are very sensitive animals.

If Jofi was calm, then Freud deduced that his patient was also calm. Jofi also helped to relax nervous patients, putting them at ease, so they would talk freely and be more comfortable.

During World War II, the Coast Guard vessel, Campbell, ended up with a stowaway that the captain certainly wasn’t expecting. One of the crew brought on board a small black and brown puppy that he’d bought as a gift for his girlfriend.

Unfortunately, the girlfriend’s landlord had a big issue with pets, but rather than giving up the puppy, the sailor brought Sinbad onto the Campbell. Sinbad became a key part of uniting the crew as they all took responsibility for training and caring for him.

Sinbad bonded the crew together, helping to create a sense of camaraderie that was essential for their duties during the war. As a reward, Sinbad became enlisted, signing his paw print in ink, becoming Chief Dog – he served 11 years with the United States Coast Guard.

Benji – The stray pooch everyone loves

The first Benji movie aired in 1978 to great reception from the public – it pulled in $45 million at the box office. Everyone loved this adorable stray, who had earned his way into the hearts and home of the children who found him.

The movie was so successful that sequels, specials, and even a television show were made. There was a remake of the original Benji movie in 2018 that aired on Netflix. Benji is a scruffy, but adorable mix of a Schnauzer, a Miniature Poodle, and a Cocker Spaniel.

Small dogs on the silver screen and throughout history have
captured our hearts. These dogs are loyal, friendly, lovable, and above all,
man’s best friend.

There are many more famous dogs, both big and small and include both real life heroes and fictional dogs of the media.  Here’s the most extensive list of famous dogs, that we could find.

Other Articles by Karol King